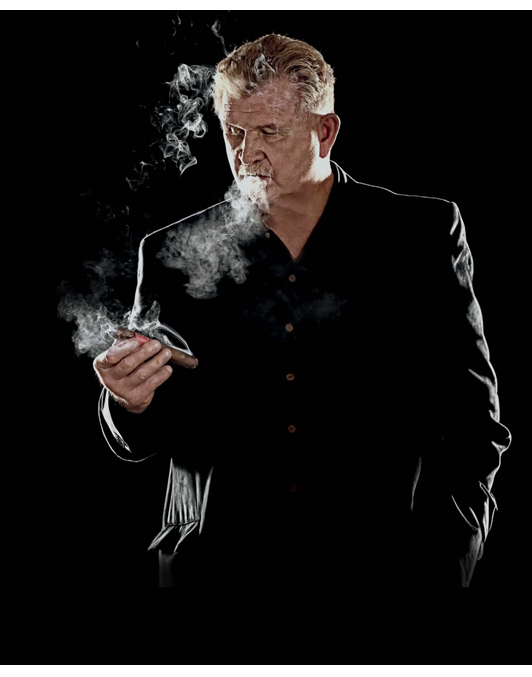 Mike Ditka is a former American football player, coach, and television commentator. A member of both the College Football and Pro Football Hall of Fame, he was the 1961 UPI NFL Rookie of Year, a five-time Pro Bowl selection and five-time All-Pro tight end with the Chicago Bears, Philadelphia Eagles, and Dallas Cowboys of the National Football League (NFL).

He was an NFL champion with the 1963 Bears, and is a three-time Super Bowl champion, playing on the Cowboys Super Bowl VI team as well as winning as an assistant coach for the Cowboys in Super Bowl XII, and coaching the Bears to victory in Super Bowl XX. He was named to both the NFL’s 50th and 75th Anniversary All-Time Team.

As a coach for the Bears for 11 years he was twice both the AP and UPI NFL Coach of Year (1985 and 1988). He also coached the New Orleans Saints for three years.

He is known by the nickname “Iron Mike,” which he has said comes from his being born and raised in a steel town in Pennsylvania.

Ditka was born as Michael Dyczko in the Pittsburgh-area town of Carnegie, Pennsylvania on October 18, 1939. The oldest child of Charlotte (Keller) and Mike Ditka, Sr. he grew up in nearby Aliquippa with siblings Ashton, David, and Mary Ann. His father, a welder, was one of three brothers of a Polish and Ukrainian family in the coal mining and steel manufacturing area in Western Pennsylvania. His ancestry on his mother’s side is Irish and German. The Polish surname “Dyczko” was difficult to pronounce in his hometown, so the family name was changed to “Ditka.” Ditka attended St. Titus School.

Under head coach Press Maravich, Ditka was a three-sport star at Aliquippa High School. Ditka hoped to escape his hometown’s manufacturing jobs by attending college with a football scholarship. Planning to become a dentist,[4] he was recruited by Notre Dame, Penn State, and University of Pittsburgh. 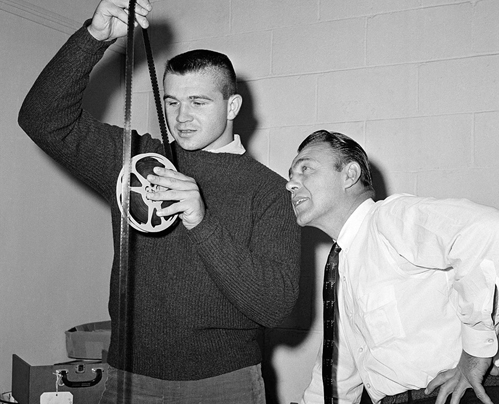 Ditka played for the University of Pittsburgh from 1958 until 1960, where he also became a member of the Sigma Chi Fraternity. He was a three-sport athlete at Pitt, also playing baseball and basketball. He started all three seasons, leading the team in receiving in each, and also served as the team’s punter. A first team selection on the College Football All-America Team in his senior year, he was enshrined in the College Football Hall of Fame in 1968.

The Chicago Bears drafted Ditka fifth overall in the 1961 NFL Draft, while the Houston Oilers drafted him eighth overall in the first round in the 1961 AFL Draft. He signed with the Bears and his presence was immediately felt. In his first season, Ditka had 58 receptions, introducing a new dimension to a tight end position that had previously been dedicated to blocking. He also scored 12 receiving touchdowns, which was the most by a Bears rookie. His success earned him Rookie of the Year honors. He continued to play for the Bears for the next five years, earning a Pro Bowl trip each season. He played on the 1963 NFL championship team. Many of the players from that team, including Ditka, were drafted by assistant coach George Allen, a future Hall of Famer, who was then in charge of the Bears drafts. During the season, against the Los Angeles Rams, Ditka tied Harlon Hill’s franchise record for the most receiving touchdowns in a game with four. Ditka ranks first among tight ends and fourth in Bears history with 4,503 yards, fifth in both receptions (316) and touchdown catches (34).

The Bears retired Ditka’s number 89 jersey on December 9, 2013 during halftime of the Bears game against the Dallas Cowboys. The number will be the final number retired by the Bears.

Ditka was traded to the Philadelphia Eagles in 1967 where he spent two seasons, before being shipped off to the Dallas Cowboys in 1969. He spent four seasons with the Cowboys, highlighted by a touchdown reception in the Cowboys’ 24–3 victory over the Miami Dolphins in Super Bowl VI. He is the only Head Coach in the history of the Super Bowl to score a touchdown in a Super Bowl as a player. 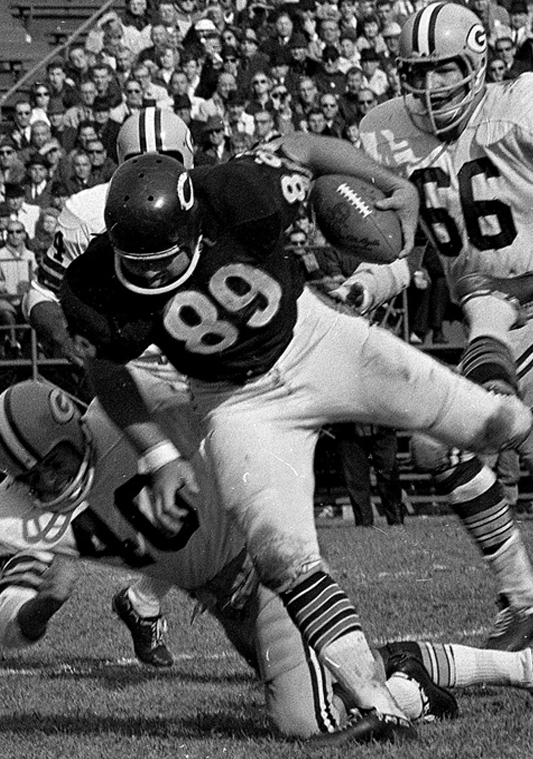 While working with the Cowboys, Ditka sent a letter to George Halas, his former head coach who was still owner of the Chicago Bears. In the letter Ditka said that he would like to come back to Chicago and be the head coach of the Bears “when he was ready”. Meanwhile, the Cowboys continued to win games although they did not win another Super Bowl while Ditka was there. His last game with the Cowboys was the 1981 NFC Championship Game, where the team fell to the San Francisco 49ers.

After firing previous coach Neill Armstrong following the 1981 season, Halas decided to take Ditka up on his offer from several years earlier and hired him to become the team’s head coach for 1982 season. Although the Bears had made the playoffs under Armstrong and his predecessor Jack Pardee, those were the only two winning seasons since Halas’ retirement as coach and he was looking for a coach who would bring the Bears back to prominence. Shortly after his hiring, as recounted by Mike Singletary in 2006, Ditka called a team meeting. In the meeting he warned that the team would experience some turnover, but if they were all willing to work hard for him and stand with him, Ditka promised a trip to the Super Bowl within three seasons. Specifically Ditka said “Give me three years, and if you walk with me, we’ll get to the dance.”

By his third season, Ditka led the Bears to the NFC Championship Game, where the Bears were shut out by the eventual Super Bowl-winning 49ers in San Francisco. The following year, Ditka’s coaching career hit its pinnacle on January 26, 1986, with a 46–10 win over the New England Patriots in Super Bowl XX at the Louisiana Superdome in New Orleans, Louisiana. Ditka has stated that one of his biggest regrets in life was not letting Walter Payton score a touchdown in the Super Bowl, instead opting for Jim McMahon to run it in twice and rookie defensive tackle William “The Refrigerator” Perry to run it in once.

The 1985 Chicago Bears are one of the few teams to consistently challenge the undefeated 1972 Dolphins for the unofficial title of the “Greatest NFL Team of All-Time”. The NFL Network series America’s Game rated the 1985 Bears as the second-best Super Bowl champions ever.

In 1985 and 1988 he was awarded NFL Coach of the Year honors by the Associated Press, The Sporting News, and Pro Football Weekly.

On December 9, 2013, Ditka’s Bears jersey number, 89, was retired in a halftime ceremony during a Monday Night Football game in Chicago as the Bears hosted the Dallas Cowboys, for whom Ditka also played and worked as an assistant coach under the late Tom Landry. “Thank you, thank you, thank you, and go Bears!” Ditka told the crowd.

In 1988, his fearsome blocking and 427 career receptions for 5,812 yards and 43 touchdowns earned him the honor of being the first tight end ever inducted into the Pro Football Hall of Fame. Ditka also scored two touchdowns on offensive fumble recoveries, tying seven other players for the most in NFL history. In 1999, he was ranked number 90 on The Sporting News’s list of the 100 Greatest Football Players. 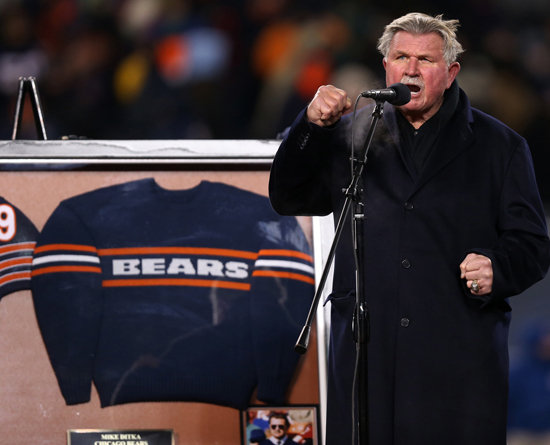